Recovering the Most Detail from Your Image

1. Get the Image into the "Forensic Recovery Range"

For Focus Magic the “Forensic Recovery Range” is the range of blur widths (or blur distances for motion blur) between 10 and 20. When Focus Magic focuses or corrects motion blur in this range it can recover lost detail quite well, but as the blur width drops below 10 the amount of detail that can be recovered progressively drops. This is illustrated with the example of a cars licence plate below.

Now that the background is selected we can blur it using Gaussian Blur (which is by the way not the same as Out-of-Focus blur) with a radius of 5 and then Deselect, to produce the following:-

Original image focused using a Blur Width of 19. The license plate is quite clear to read. This image is within the “Forensic Recovery Range”. 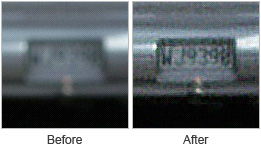 Original image reduced to half its size and focused using a Blur Width of 10. The license plate is still quite clear to read. This image is also within the “Forensic Recovery Range”. 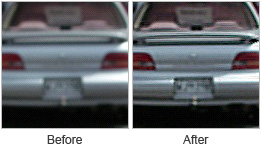 Original image reduced to one quarter of its size and focused using a Blur Width of 5. The license plate although a little clearer, can no longer be read. This image is no longer within the “Forensic Recovery Range”. 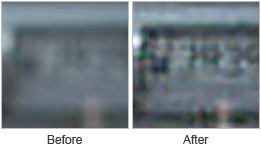 Original image reduced to one quarter of its size, saved, opened again, increased back to it’s original size and focused using a Blur Width of 19. After scaling the image down and up again to its original size, the license plate is surprisingly clear. By simply scaling the image size up, this image has been brought back within the “Forensic Recovery Range”.

For scanned photos, scan them in using a resolution which is high enough to have a blur width between 10 and 20. If for example the photo was scanned in at 1200 bpi (bits per inch), and the blur width is 6, then scan it in again using 2400 bpi so that you can use a blur width of 12. If the image was scanned in at its highest resolution then increase the image size as for a digital camera (next). Not all scanners produce sharp scans. If you are scanning in an image with quite a low blur width, it is vital to use a good scanner which doesn’t contribute to the blur of the image. After scanning the image in, compare the real image with what you see on the screen and make sure that it hasn’t contributed any blur to the image. If you have the negative of the photo, then you could make a large print of the photo before scanning it in. Make sure that the photo lab understands the importance of getting a sharp image.

If the photo is from a digital camera, then increase the image size so that the blur width is in the 10 to 20 range. It is probably best to increase the file size by a factor of 2 or 4 so that the interpolation is kept as simple and hence as accurate as possible.

3. The Effect of Noise

A grainy image won’t focus as well as a smooth clean image.

Image with no noise (grain). 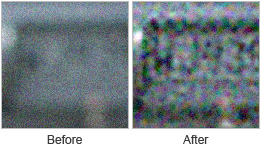 Noise (10 % uniform noise using Photoshop) was added to simulate a grainy image. The re-focusing is not nearly as good.

If you already have an image, there may not be a lot you can do to remove noise or grain. If you have a negative, you might be able to reduce the noise by developing the print again using better equipment. If the image has dust on it, then you can gently wipe the dust off.

The Forensic Strengths of the different Image Source settings are as follows :-

You can experiment with the different focusing strengths so as to get the best result. As a general rule, select a Focusing Strength which is one step stronger than the strength that would be selected from the Image Source. For example for a Digital Camera, which has a High setting you would choose Very High, and for a Conventional Camera which has a Medium setting you would choose a High setting.

Note that the Image Source also sets typical values for Random Noise (grain) and Shot Noise (dust and scratch removal) which Focus Magic uses to correct the image optimally for that type of image. 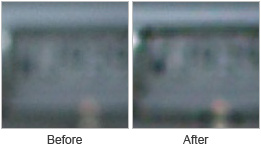 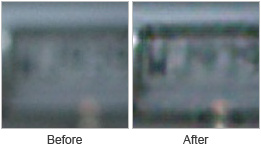 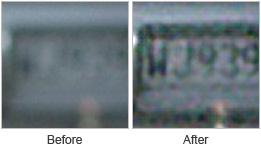 You can see in the above example which is from a digital camera, that the clarity increases as the Focusing Strength increases. This only works however for high quality input images (with accurately defined pixels). 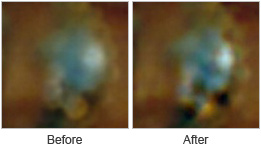 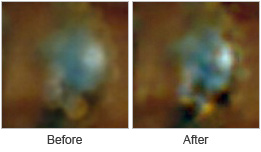 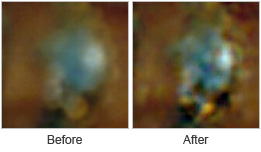 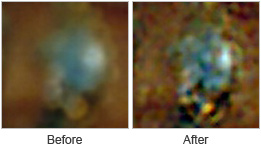 In this image which is a scanned image from a print, we are trying to tell the time at which the photo was taken by zooming into the ladies watch (shown upside down). In this case due to the pixel values lower accuracy the image gets quite distorted when the Focusing Strength is set to Very High. It looks as though the hands of the watch can just be seen. If the negative is available, then a better result could possibly be obtained by enlarging the print and scanning again with a better scanner (this image was scanned using a cheap scanner).